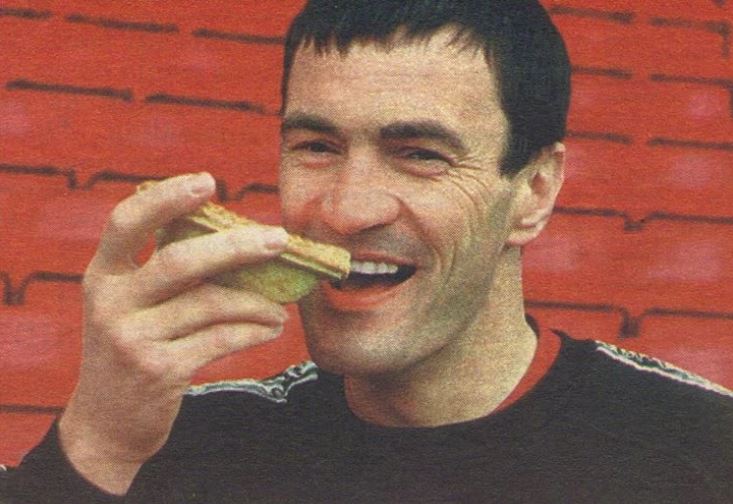 In Conversation With Derek Mountfield

At school my life was all about sports, not academic stuff, just sports.  Football, rugby, basketball, everything. Up to 1978 it was still playing rugby first.  My teacher still wanted me to chose rugby but I chose football and joined Tranmere Rovers as an apprentice in July 1979.  I did all the nasty stuff that an apprentice had to do in those days like sweeping the terraces, cleaning boots and mopping floors etc. In November 1980 Johnny King was sacked but I still had the letter that honoured my apprentice contract.”

“After about 30 games for Tranmere they told me they wanted to sell me to Everton. I was a season ticket holder at Goodison for years and now I find myself signing a two year deal and playing with some of my heroes that I had supported on the terraces with my mates who I now had to leave behind on matchdays. I was given a 2 year contract that said I signed for Everton FC.  What happened in the next 6 years was surreal.” It certainly was, for Derek, under the management of Howard Kendall,  won the league title twice in 1985 and 1987, FA Cup in 1984, Cup Winners Cup  1985. They were also  League runners up in 1985-6 and FA Cup finalists that same season as well as in 1984-5 and in his time at Everton they won the Charity Shield 3 times.

“I remember a pre-season game at Walsall in which Kevin Ratcliffe was sent off and I had my opportunity.  My relationship with Kevin at the heart of the defence grew.   It was an amazing time at Everton and I won all those things with them.  Howard Kendall was a very good man manager but when Dave Watson was signed it became harder but I wanted to play football and had to get away which was a massive wrench.” In total Derek played 154 times for Everton scoring 25 goals which was a very good return, giving credit to Kevin Sheedy and Trevor Steven for the quality balls they would whip over.

“I signed for Aston Villa in 1998. Graham Taylor was brilliant and I was playing with some fantastic footballers but we were not invincible.  The first season was a bit of a struggle but the second season we pushed Liverpool all the way.  Graham loved being away with the boys all together and socialising with them. I think later on Graham must have regretted taking on the England job.”

“Josef Venglos didn’t speak the language very well in his broken English.  He kept the same team but the confidence wasn’t very high. We went to Malaysia at the end of the season and came back via Prague. We had a long wait at the airport.. Josef got off the plane with us but we never saw him again!  Enter Big Ron. He was ruthless and told me I wasn’t in his plans.  He isolated me which was not nice. He brought in Shaun Teale to partner Paul Mc Grath.”  There were around 90 appearances and 9 goals for Derek whilst at Villa.

“Then I joined Wolves, on loan initially. I became ill for three months and lost a stone and half in weight.  There was a time when we played Chelsea away got beat 1-0 and we stayed in a hotel  London before moving on to Portsmouth next game.  We lost 2 or 3 nil and  Jonathan Hayward cancelled the fish and chips on the way home. I had total respect for his father Jack but none at all for him. I was in the first team and playing well until Paul Devlin bollocked  my eye ball”

In 1994 Derek left Wolves and the first contact with Walsall was made, “There were 3 or 4 clubs interested and I spoke to Paul Taylor. The offer he made was outrageous, totally stupid.  I spoke to Mick Wadsworth, Carlisle manager and met owner Michael Knighton – what an experience that was! I signed for Carlisle  on a month by  month contract for every month of my time there spending two days a week at home. We were getting better every match with some good young players and we played some good football and we were 3rd Division champions.”

“I had a pre season injury and we played Walsall away in the October time.  I had just been released by Carlisle and had a heated discussion about this.  I attended the game and went into the away dressing room to wish the lads all the best. As I came out I bumped into Chris Nicholl and he was asking why I wasn’t playing.  I told him that I had been released. He said to ring him tomorrow and come and see us. My meeting with Paul Taylor didn’t go too well and I walked out.  However later a deal was sorted out and it was identical to what I was on at Carlisle.” Just before he came to Walsall there was a 4 game stint at Northampton.

” I liked playing for Chris Nicholl.  He was a brilliant fellow and had some good times under him. I played in 49 out of 53 games  but Paul Taylor released me.  I thought about quitting playing myself.  I thought I was at the end of my playing career. I was training with West Brom to keep fit.  There was a call from Jan Sorensen asking me if I wanted to come back as player coach.  During the course of the season I kept saying to Jan that we need to go back to basics but he wouldn’t listen.  I wanted him to change and give the kids opportunities.  Jan got sacked but I never got an offer to work with Ray Graydon.” For Walsall Derek played in 100 games and scored 2 goals.

” I thought about finishing with football then.  I turned out for Bromsgrove Rovers but I had a fall out with the chairman and I did not enjoy my time there. I had a call from Mick Wadsworth at Scarborough who asked if I was fit-ish.  I went but after 4 games Mick resigned.  They put me and Ray Mc Hale in charge. We got the spine of the team sorted out. We needed three wins at the end of the season to survive against Chester, Halifax and Peterborough but we could only force a 1-1 draw with Peterborough on the last day, with Jimmy Glass scoring ‘that goal’ for Carlisle that  ensured their safety  and we lost our league status.”

” I applied for 3 or 4 jobs and got a call out of the blue from Cork City around August / September time 2000.  However I got stabbed in the  back  there and lost my job. I went to Uni for 3 years and got my sports science degree. I’ve worked with special needs kids and have enjoyed doing that.”